We had a very successful event last Wednesday at KTH. Experienced technology evangelist Roman Strobl came to Stockholm to have a presentation together with Sun campus ambassadors. Students were very enthusiastic and asking lots of question regarding open source, Sun, Oracle :), java, OpenSolaris and other project.

We would like to thank all of the participants and hope that you learned lots of new things about Sun, open source and why it is important. For next events, please fallow our blog. 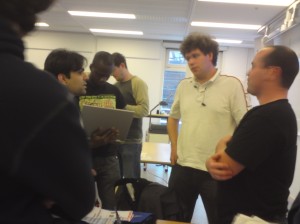 Alper Celik is talkin about Open Source Networking Project and how they converted a regular PC into a router at the very first day of European Education and Research Conference. Berlin 2009

A team of international student and Sun Campus ambassador Alper Celik, developed an open source networking solution at KTH – Stockholm, which converts a regular PC into a router !!!

OpenCASE is an Open Source project. This project’s outcome is a whole network solution completely based on open source software. Using OpenCASE solution, regular PCs can be turned into routers. But not only that, they can also run networking services like Network Administration, Traffic Monitoring, DNS, Web Server and so on.

Open source networking solution, which is 70% cheaper than proprietary alternatives in the market, developed to help capacity building in African Research and Education Networks. Open Case’s software, which is completely free, customizable and open for further improvements, has been developed to be used in regular PCs. The software provides complete network systems that include not only the routing but also the management and security means. Comparison tests against well known network companies’ products gave great results and proved what our technology can truly deliver on the promises of internet today.

If you are interested please have a look at to project web site. You can find our final report from here: http://www.tslab.ssvl.kth.se/csd/projects/0821116/sites/default/files/FinalReport.pdf

We are happy to announce that KTH OSUM and Atilim OSUM clubs are now partners. We encourage our members to join both OSUM clubs and enjoy making new friends.

As all of you know, the philosophy behind OSUM is to be active inside the “learn-share-make community” triangle. In this perspective, we are happy to partner with different OSUM clubs all around the world and extend our network. This will also help our members in Sweden to learn new things and make new friends.

Do you work on an innovative project based on FOSS technology? Have you experience with FOSS Communities and how they can change the nature of traditional project success ?
• Development and deployment in the cloud and virtualization
• Social networks and Web 2.0 trends
• RIAs, scripting, and tools
• Dynamic languages, databases, and Web and application servers
• Open-source projects, business models, and trends
• And more
Send an 150word (max) abstract to CommunityOne-Oslo@sun.com

We’re opening our doors. CommunityOne is an open developer conference sponsored by Sun Microsystems. After two capacity years in San Francisco, we’re rolling out the red carpet in Oslo in April. What can you expect at CommunityOne? No marketing hype or selling tactics, just the opportunity to evaluate open-source projects that span languages (Java(TM), PHP,Groovy, AJAX, Ruby, Python), operating systems (OpenSolaris(TM), Linux, Android), Web and application servers (GlassFish(TM), Apache), databases (MySQL(TM)), services, and more. And you can attend the CommunityOne Oslo main conference at no cost.

Name: Jonathan Schwartz
Title: CEO
Company: Sun Microsystems Inc.
Location: Santa Clara, Calif.
Best books read this year
•Empires of Light, by Jill Jonnes, “a really entertaining history of electricity, its discovery, generation and distribution around the world. Clouds — and computing, broadly — have parallels to that history.”
•The Box: How the Shipping Container Made the World Smaller and the World Economy Bigger, by Marc Levinson, “about the expansion of free trade made possible through the standardization of shipping containers, which again has a great parallel to our industry.”

•Mountains Beyond Mountains: The Quest of Dr. Paul Farmer, a Man Who Would Cure the World, by Tracy Kidder, which “reminds you what’s truly important.”

Favorite non-work activity: Cooking and eating, with friends and family.
Philosophy in a nutshell: “The harder you work, the luckier you get.”
Fantasy dinner party guests: “Larry Ellison — I’d love to have him over. We both love databases; we’d have a lot to cover. I’d even cook. Heck, that’s probably unrealistic.”I guess I’d love to have dinner with John Maynard Keynes, Steve Martin, Alice Waters and all three of this year’s Nobel laureates in physics. Alice cooks, Steve picks the wine, we all learn about broken symmetry.”

What are you doing to help your customers with their economic problems?

We are preconfigured for the downturn. If you think about the discretionary expenses that go into operating a data center, first and foremost there’s the physical plant itself — the physical space, the power consumption, the HVAC. So all the work that we do around energy efficiency and on getting optimal performance — it’s because the environment ends up being a huge operating expense for our customers. And to the extent that we can help them lower their environmental impact, we’re also lowering the economic impact on their businesses. That’s clearly Job 1.

The second element of discretionary expense is software licensing, and probably the single biggest license that customers have to buy is [for] proprietary databases. Second on that list are proprietary application servers and an application infrastructure. I just was with a customer who didn’t recognize that he had roughly 2,000 developers working with MySQL because it wasn’t a purchase standard [in his organization] — but it had become the de facto [database] standard. He didn’t recognize that he could get that level of productivity [from an open-source database].

The same is true for the application server marketplace. OpenSolaris — now that it is multivendor and multiplatform and the source is available, those environments where you don't need support don't have to pay for it. And then we enable customers that want to subscribe in production environments to pay for the supported version.

With the economic downturn, do you really expect customers in the near term to, say, swap out an Oracle database and replace it with MySQL? Unquestionably. Now, that doesn't mean they are leaving Oracle -- Oracle is a fantastic company, and they've built a fantastic database. But there is no longer one-size-fits-all in the enterprise database marketplace.

In your blog, you talked about aggressively expanding your customer base. How does the new four-socket Sparc Enterprise T5440 help you do that? It's a little unlikely that this server is going to be the first system that a new customer buys from Sun. I don't want to close off that option, [but] it's more likely that they pick up a one-socket Niagara system. Just on price point, you seldom spend $50,000 to $100,000 on your first server, and that's the price range that these [new] systems start at.

Niagara as a whole, though, gives us access to a market that really is representative of a unique problem space. We don't see IBM with [its System p line] at all in the Niagara space. What brings new customers to Sun is differentiation and innovation. [They] want to be 50% faster, or 50% more energy-efficient, or half the size. Those things, when added up across really large data centers, mean real money to real customers.

As you have seen with Thumper -- a 48TB storage platform based on the ZFS file system -- we're planning on taking Solaris and extending all the skills and knowledge and ecosystem that we built in our server business to our storage business. That now means open-source platforms will be at the heart of open storage as it evolves as a market category, and we plan on being a leader there. That's very disruptive to the competition.

What role does FUD -- fear, uncertainty and doubt -- play in the server market these days? I'm asking this because Linux advocates don't seem to miss an opportunity to explain why that operating system will crush Solaris at some point. How do you counter that? We don't pay a lot of attention to that; we pay a lot of attention to customers. We are very well aligned with the Linux community. We're not the enemy of one another -- and I know there are folks who get emotional about that now and then. But our focus is going after the proprietary vendors that are causing our customers a lot of grief and a lot of pain. And the more we focus on solving those customers' problems, the more they embrace open source.

Some people think that the current economic problems will accelerate the adoption of software-as-a-service technologies. What are your thoughts on that, and how are your products going to line up to support SaaS? Customers under stress are open to change. And that is what I see from every customer I've spoken to, especially [lately]. That means they are open to change in moving away from proprietary software vendors and proprietary storage vendors, more open to moving to software as a service, more open to moving to free software -- and that, again, creates opportunity for Sun. I think the doors are going to be more open in the next year than they have ever been.

Where is this innovation going to come from? The fear is that investment dollars will dry up. Innovation rarely arises in a bubble. Someone clever once said that necessity is the mother of all invention, so believe me, people are becoming a lot more innovative as I speak. Why? Because they have to. If your budget just got cut 50%, I promise you, everything is on the table. There is no better time to start a company than right now. It may be tough to find funding, but there is no better time to go look at the parade of legacy technologies that need to be replaced and the extraordinary interest from customers in entertaining new ideas.

If that's true, are you considering any changes in where your research dollars are being spent? In general, we're looking at ways to increase R&D. That doesn't mean across everything. It means to double down on those parts of the market that really represent clear revenue return. Coming back to the T5440 -- although [the Niagara platform] is more than a billion-dollar business, you have to remember that [work on] the first silicon began in 2001. R&D takes patience, discipline and rigor. We're not going to make changes within the quarter or within the next six months that are just going to be episodic or ephemeral changes because there was a downturn.

Sun Shines on KTH
Create a free website or blog at WordPress.com.